Liuto forte in d – “Bach-Lute”
(Copy of the historical model)

We also offer a copy of the historical model of the Bach lute. This is a Liuto attiorbato by Matteo Sellas (Venezia 1640), which was converted into a swan-neck lute in the 18th century.

Repertory: all lute compositions of Johann Sebastian Bach in their reconstructed original version, all compositions for d minor lute from 1630 to 1800 (taking into account the extended tuning of the Bach lute), accompaniment of the two arias in St. John’s and St. Matthew’s Passions.

Since the instrument has 12 pegs in the first pegbox and 6 pegs in the second pegbox, both string dispositions are possible. In the setup with 12 fingerboard strings and 2 bourdon strings, the indicated tuning variations can be realised without changing the strings just by retuning.

For the performance of BWV 995, 997 and 998 a change of the string disposition from 12 strings on the fingerboard and 4 bourdon to 10 strings on the fingerboard and six bourdons is not mandatory. The change to a disposition with 10 fretboard strings and 6 bourdon strings (Angélique) requires the replacement of only two fretboard strings with bourdons.

or 10 fingerboard strings and 6 bourdon strings
(string disposition of the Angélique), tuned in 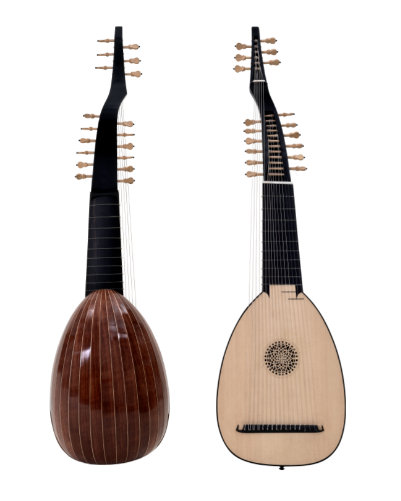 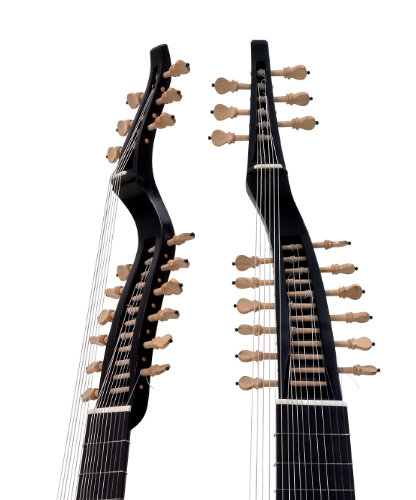 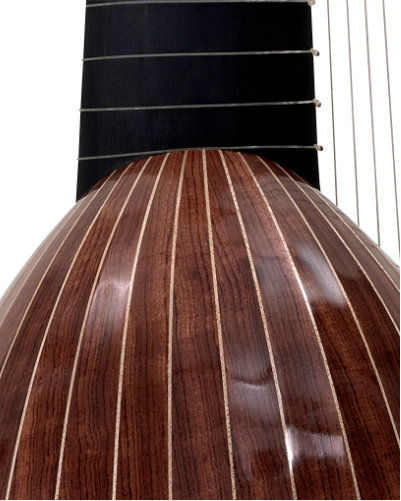 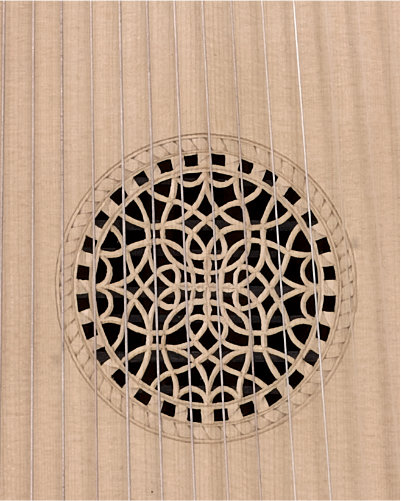 Discussion about Johann Sebastian Bach’s lute compositions began in 1901 with an essay by Wilhelm Tappert on these works, which until then had received little attention. Since that time, a number of theories have emerged, essentially all based on the assumption that these pieces were written for the same lute model with the same stringing and tuning as was used by Sylvius Leopold Weiß and his students.

This assumption was wrong and can be refuted by the compositions themselves.

The solution to the problem was made particularly difficult by the fact that Bach’s lute works are not handed down in tablature, but exclusively in sheet music. In two cases (Suite in G minor BWV 995 and Prelude, Fugue and Allegro in E-flat Major BWV 998), these are even manuscripts from Bach’s own hand, whose titles expressly mention the lute as the executing instrument.

Additional confusion was caused by three manuscripts of the 18th century, which contained intabulations of three lute compositions by Johann Sebastian Bach (BWV 995, 997 and 1000) for the most common lute model of the time with 13 courses in the basic tuning Aa-Bb-Cc-Dd-Ee-Ff-Gg-Aa-dd-ff-aa-d’-f’. These arrangements, however, contain substantial changes to the surviving musical text of these works and, in the case of the Suite in G minor BWV 995, do not even do justice to the extent of this composition down to Kontra G as unmistakably demanded in Bach’s manuscript. 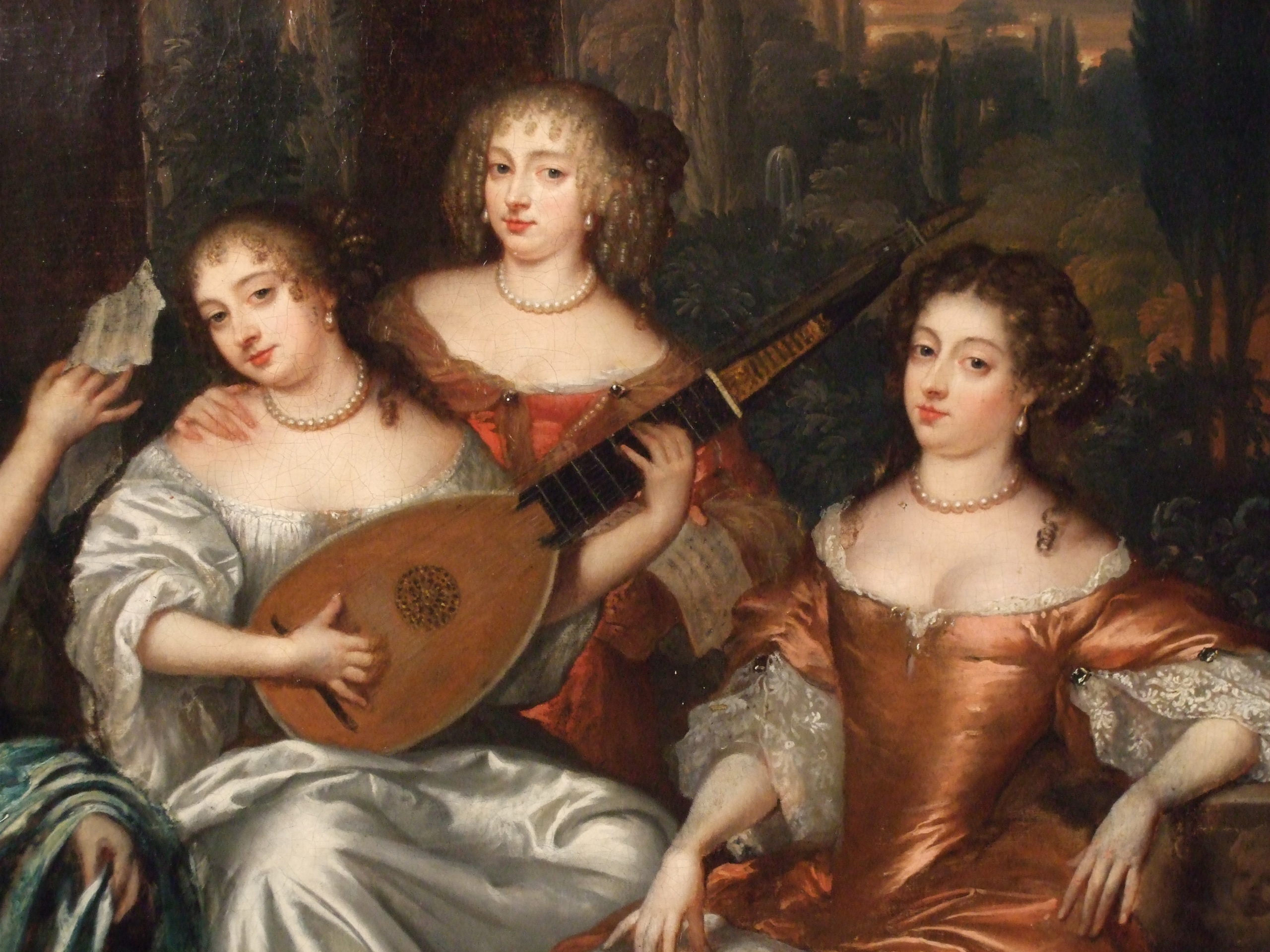 Instead of considering the possibility that J.S. Bach’s lute pieces might have been composed for a differently tuned and stringed lute model of the time, most of today’s players and musicologists tried to explain this obvious discrepancy by saying that these pieces might not have been written for the lute at all, but for the lute harpsichord – a gut-stringed keyboard instrument – which would allow seemingly unplayable notes to be played without difficulty. Others took the above-mentioned contemporary arrangements of these pieces for a 13-course lute as an opportunity to conclude that Bach was not at all concerned that a performance of these works was faithful to the score, that he wrote only “ideal” music and then left it up to the players to decide which notes they would like to omit or shift by an octave.

Another direction of discussion, which also did not lead to useful results, was the question of whether Bach was a lutenist. This question was of about the same value as that of whether he was a cellist or a flute player, since he left compositions for these instruments.

Bach possessed – among other keyboard instruments – a lute harpsichord as well as a lute whose value in his estate was estimated at 21 talers.

The question should therefore rather have been how this lute model in his possession was tuned and strung in order to be able to reproduce his lute compositions faithfully on it.

The only proof that Bach’s pieces were actually intended for lute is to show how these pieces could be played on a different lute model of the time, or in other words, to reconstruct the path of his hands on the instrument with the greatest possible accuracy. I have dedicated many years of my life to this task.

The results of my efforts to answer this question are only briefly summarized here:

Bach’s lute compositions are indeed written for a lute model of his time, whose tuning from the sixth string on, however, deviated slightly from the traditional tuning and – like the Angélique – was entirely strung with single strings. Bach’s lute may probably even exist today, which will be discussed after some more dedicated research in due course.

On this lute, all of Johann Sebastian Bach’s lute compositions can be played not only absolutely correctly, but also completely naturally. The perfectly logical technical structure of their execution is in no way inferior to the perfection of this music. It is an unequivocal proof that Bach – who was not a professional lutenist – designed his pieces for lute on the instrument and examined each individual bar for its practical feasibility on the instrument. This perfect, technical playing structure leaves no doubt about it, that he first fixed these pieces in French tablature. His own subsequent transcription into staff notation apparently served to reproduce these works on his keyboard instruments, since the busy man probably lacked practical practice in lute playing.

The size, tuning and stringing of Johann Sebastian Bach’s lute can certainly be deduced from his works for this instrument. 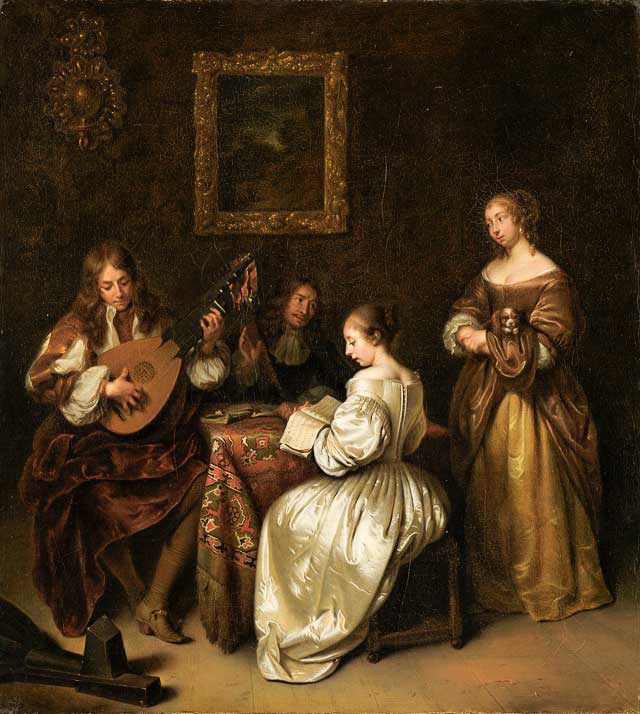 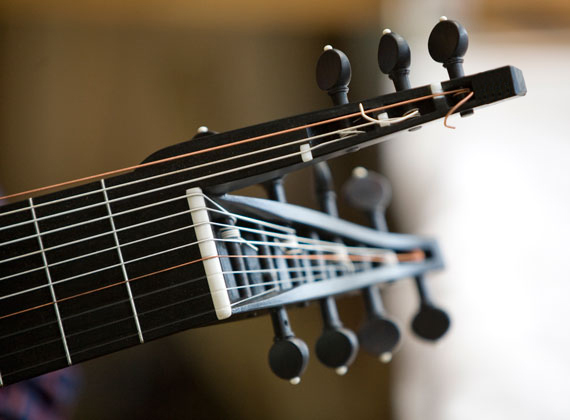 The tuning of the first 5 strings corresponds to the traditional D minor tuning of this period. The sixth string, however, is tuned to B flat in BWV 996 BWV1000 and the accompaniment of the two Passion arias, and to C in BWV 997, 998, 995 and 999. The suite in E major BWV 1006a requires the scordatura H – cis – e – a – cis’ – e’ for the upper playing strings, as was often used in 17th and 18th century lute music as well as in the violin repertory of this time (Heinrich Ignaz Biber).

Bach’s works for the lute were composed over a period of about 45 years. Two periods can be distinguished:

In the first period his instrument had 12 single strings on the fingerboard (lowest stopped note is C sharp) and two bourdon strings. In the second (after 1728) 10 individual strings on the fingerboard (lowest note played is F sharp) and 6 bourdon strings. This is the classical string disposition of an Angelique and suggests the assumption that the pegbox on Bach’s lute around 1728 underwent a rebuild.

The fingerboard of an Angelique designed for only 10 fingerboard strings would, however, be too narrow for the 12 single strings required for Bach’s lute compositions of the first period. The same applies to the double head lute, whose pegbox construction and neck width would allow a maximum of 8-9 fingerboard strings. 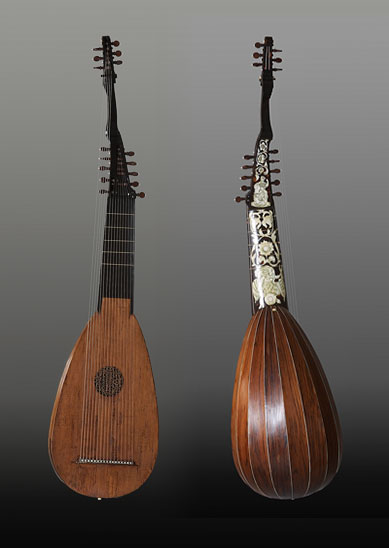 The only lute model existing at that time that had a neck width that allowed 12 fingerboard strings to be strung and about 60 cm string length on the fingerboard was the 14-string Liuto attiorbato. Although this instrument traditionally had only 7 fingerboard courses, its lower pegbox was so wide due to the neck construction that its left side could be cut out without any problems – as is usual with the Angélique – in order to make room for additional fingerboard strings. The double-stringed bridge of the instrument initially remained the old one, only the upper string of each course was omitted and the original G tuning of the Liuto attiorbato was transformed into a modified D minor tuning. Such a stringed instrument is the only one of all lute models available at that time that allows the correct reproduction of BWV 996 and 1006a (with scordatura).

By 1727 at the latest, Johann Sebastian Bach’s lute, equipped with only 14 single strings, seems to have undergone a modification in Leipzig. BWV 995, 997 and 998 written after 1727 require a 16-string instrument with 10 fingerboard strings and 6 bourdon strings, i.e. the classical string arrangement of an angélique. This suggests the suspicion that the client for BWV 995, 997 and 998 was a player of such an instrument, but did not use it in the diatonic tuning of an angélique, instead in the modified D minor tuning with single strings mentioned above. The 16th string, which was “surplus” in this tuning, was used for a tone which was outside the tuning of the bass strings of the instrument according to the key. BWV 995 and 997 are the note E (in addition to the regular bass string in E-flat), which occurs only once in BWV 995 (Sarabande) and twice in BWV 997 (Double). For BWV 998 this additional 16 string was tuned down to D flat and used only once in the whole piece (Allegro). These altered bass tones sound highly attractive at the relevant passages, were deliberately composed in; if transposed an octave higher, not only would Bach’s flawless voice-leading be falsified, but these notes would also lose much of their effect. A historical parallel to this type of tuning is probably the 15 course D minor lute by Jonas Elg (1728) at the “Musikhistoriska Museet” in Stockholm. The fourteenth and fifteenth courses were most likely tuned to E-flat (D sharp) and C sharp (D flat). The instrument may be associated with two anonymous 18th century lute suites in E-flat minor and A flat major, in which these altered tones are obviously also an essential part of the composition and thus indispensable.

So that Bach’s compositions for the 14-string instrument with 12 fingerboard strings as well as those for the model with swan neck and only 10 fingerboard strings can be reproduced on the same instrument, our 16-string Bach lute has 12 pegs in the first and 6 in the second pegbox of the swan neck. This opens the possibility to use all Bach-tunings for the correct reproduction of Bach’s lute works on the same instrument.

More detailed information on Bach and the lute as well as the works published to date are available here free of charge: www.musica-longa.de