This question has often been stylised, unjustifiably and sometimes fanatically, as a ruling principle in the aesthetics of sound. It has nursed the illusion, particularly among players using fingertips, that the decision to exclusively employ this technique would guarantee in advance a definite quality in the tone. It remains a fact that you can play unbearably badly whether using fingertips or fingernails, as a number of recordings prove.

One thing is certain: the fingertip player takes longer to develop a smooth tone, free of unwanted extra noise. Just as the nails need to have a certain shape in order to move effortlessly over the string, the fingertip also needs to take on a special form before the player is able to set the string in motion using only the very tip. This can take months and even years. 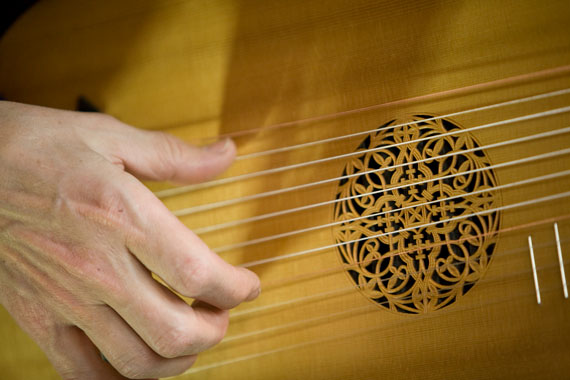 In my view, the choice of plucking technique is less a question of aesthetics than of simply practical reason, primarily dependant on the string material employed. It would probably not be prudent to want to dispense with the nails on a Spanish guitar, whose first string has an average tension of 8 kg. But an historical lute, whose chanterelle has a tension between 3 and 3.5 kg – excepting on theorbo, archlute and gallichon – reasonably expects the softer touch of the fingertips.

On the liuto forte, whose models all use medium tension (approx 4 – 6 kg), nails and fingertips are equally suitable. The instrument loses none of its brilliance and sustain when played with the fingertips, but can withstand the boldest attacks of fingernail players – and responds gladly to any application of vibrato.

As we have seen, playing with the fingernails was completely acceptable on certain lute instruments. The evidence of accounts by Alessandro Piccinini (1566-1639) and, a good century later, Sylvius Leopold Weiss, makes it clear that theorbo and archlute were normally played with nails.

Besides the string tension, it is the string material itself which should influence the choice between fingertip and nail. Gut strings have a slightly rough surface, even in polished state, when compared to the surface of nylon or carbon strings. This is a clear advantage for stroking with fingertips, as the skin of the finger can get better contact. Nails will always generate a slight extra noise on gut strings. This was probably why a sound-purist like Francisco Tárrega (1852-1909), who had no nylon strings yet at his disposal, decided later in life to switch to fingertip style although this could appear disadvantageous to the high tension of the strings of his instrument. On nylon or carbon, with their mirror-smooth surfaces, a well-polished nail moving noiselessly over the string is the ideal medium. Fingertip players on nylon and carbon will need to press deeper into the string, but are able this way to reap a stronger tone.

The differences in sound between gut and nylon have less to do with differences in specific weight than with the difference of structure. A gut string is a multifilament made up of many fibres, twisted together. A nylon string is one single extruded fibre, a monofilament. The multifilament is naturally less stiff and less resistant to bending. It is therefore stronger in overtones and responds better to hammer-ons and pull-offs in the left hand. A future development of synthetic descant strings with a multifilament structure would be very welcome, as it would be able to combine the hardiness of synthetic materials with certain sound qualities of gut.