Methods of Construction of Lute and Guitar compared

The figure of eight form on the guitar is most attractive and has given occasion to many a poetical comparison. But aside from the winged associations, there is little sense in waisted body curves on an instrument that is to be plucked: where there is no longer a bow that needs the angle to reach the individual strings. The price the guitar pays for its beguiling shapeliness is primarily forfeited air mass. Both violins and guitars are instruments whose bodies have front and back and sides, or walled resonating chambers, but with a significant difference: the back plate of a violin is kept in constant vibration during bowing by means of the soundpost. The back of the guitar, on the other hand, is kept resonating by nothing more than the sides, along with the air within, to pass on the vibration. It has an only very limited capacity for projecting the sound. The acoustic efficiency of a guitar is something between five and ten percent;1 the remaining 90 to 95% of the energy put in is actually transformed into heat. 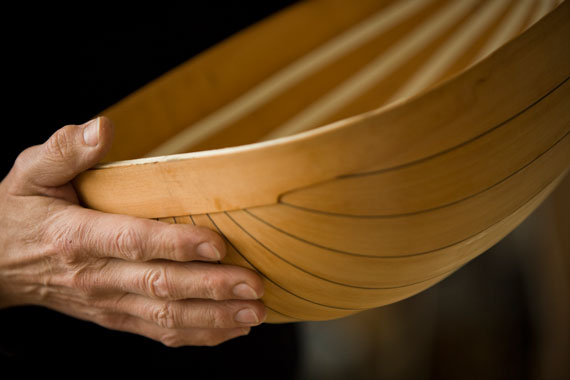 The lute is built according to a thoroughly different principle. The body has more in common with the reflector and the diaphragm of an electrical loudspeaker. The body as reflector is in no sense rigid. It reacts in its own particular way to the vibrations of the soundboard, which are passed on directly, without the intervention of side-walls. Moreover, the soundboard above the rose is uninhibited in its vibrations, in contrast to the guitar, by a glued-on fret-board. The whole of the upper sound table of the lute makes a major contribution to the production of the formants.2

Regarding the bar-bracing of the soundboard, there are significant differences between historical lutes and Spanish guitars in the positioning of the first bar nearest the bridge, through which the vibration is transmitted to the soundboard.3 A very short distance between bridge and bar in the old lutes provides the full overtones in the descant register, but drastically reduces the fundamentals in the basses. De Torres and his contemporaries moved this first bar forward to a position immediately behind the sound hole, which shifted the balance between descant and bass in favour of the bass tones. It should not be difficult to imagine that further solutions are possible between these extremes, which in the best cases would lead to a happy synthesis between the strong overtones of the lute and the fundament richness of the tones on the Spanish guitar. This was one of the considerations which lay behind the development of the “new lute”, or Liuto forte.

1 As a comparison: The sound production of a guitar amounts to around 0.004 watts; an average domestic loudspeaker gives out 4 watts.

3 The resonating bellies or soundboards of plucked instruments are stabilised by bars which are affixed with glue. On historical lutes there are at least three between the bridge and the rose.