Not seldom do we hear the opinion voiced that lutes were earlier all strung in courses or ranks, that is with double strings, and that this double-stringing is in fact the prime marker of a “real” lute. This is false. 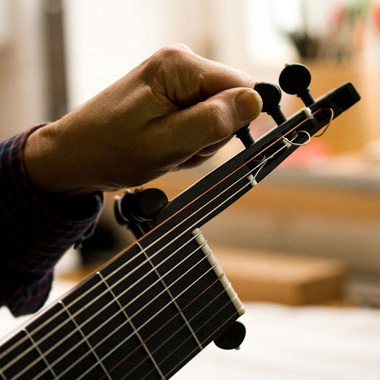 Single stringing occurs regularly in earlier centuries for instruments of the lute family: theorbos, along with archlutes, chitarrones and gallichons, were strung over the fingerboard with sometimes single and sometimes double courses; while the angelica, tuned throughout like a diatonic harp yet without doubt an authentic historical lute, was exclusively single strung.

Regarding the doubling of the deeper tones, the introduction of octave companions to the bass strings was originally a makeshift – particularly at the time when plectrums were being abandoned for the softer fingertips – in order to lighten the sound of the still unwound strings of very thick, plain gut with its heavy, dull tone. The same purpose was served by the placing, beneath the soundboard, of the bass bar behind the bridge, and later the invention of an extended neck or double head to lengthen the lowest strings.

Octave strings were already strongly criticised by John Dowland (1562-1626) for falsifying the harmony: “… among learned musitians that custome is left, as irregular to the rules of Musicke”.1 One actually could have finally done without them, once wound strings were invented, no later than 1670 – but they were kept for their effect of giving an imaginary fullness of tone to strings of low tension, as a kind of permanent 4-foot register.2

On baroque lutes with 8 or more bass strings tuned diatonically, the octave-doubling strings have the further drawback that the whole register can only be played monophonically, and with the thumb. To pluck with other fingers, that way striking the high string earlier, would mean hearing the subsidiary high octave before the deep note itself. But on the angelica, for example, which was single-strung throughout, the player produced three and even four-voiced chords in this low register.

I believe that the reluctance among modern composers to write works for the old lute is due not least to the restrictions apparent in the stringing. Julian Bream expressed the right instinct when he advised Benjamin Britten to give his “Nocturnal op.70” to the guitar, rather than to the lute as he had originally planned. A lute in its traditional form was in no way in a position to sound the depths of such a composition.

Double courses require a technique which rather strokes than plucks the strings, setting them in vibration parallel to the soundboard. From the point of view of optimal air and soundboard resonance, this is known to be the least effective method. Players of guitars and theorbos know they need to play the strings down “into” the instrument, in order to get the full sound. Renouncing double courses does admittedly first mean losing that silvery rustling which many enthusiasts find to be the “authentic” lute’s chief characteristic. It leads, however, in combination with the new soundboard construction and higher string tension, to a real exploitation of the enclosed air mass and to an incomparably greater range of sound-shaping possibilities.

Two strings with half-tension do not achieve the same realisation of sound as does a single string in full tension. Moreover the co-ordination of thin strings to the internal resistance, or impedance, of the soundboard deviates widely from the ideal match.

1 Dowland’s contemporaries could hardly afford to dispense with octave stringing, despite his reservations, since the sound of thick gut, unwound, on a lute of short string-length was scarcely satisfactory without them.

2 By 4-foot register is meant the supplementary set of pipes or strings on keyboard instruments which, with the depressing of a single key, automatically double the note an octave above.