Lute players tend to defend their instrument as consummate in its traditional form. Any improvements are held to be unnecessary or impossible, and are therefore rejected out of hand. This awe for tradition can only be admired, but it respectfully forgets that while they flourished between 1400 and 1730 the lute family were the most changeable instruments imaginable. Lutes went out of fashion and circulation only when their players and designers gave up following the course of European music. 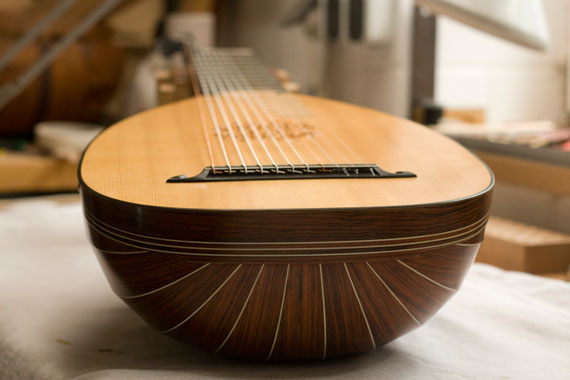 Regarding the lutes from the 18th century which have survived in playing order today, I have had the opportunity of not only fingering them in those dreams common to owners of more or less succeeded copies as they stand in front of glazed museum cabinets. As both player and owner of several of these original instruments, I have been able to profit from years of practical experience, and can make a balanced judgement concerning what they are capable of, and what not. I think I can guarantee, on the basis of this familiarity, that the development of the European lute is far from at an end – and will not be, hopefully, for centuries to come.

The Liuto forte is not a hybrid like the German “Wandervogellaute”, for example, of unblessed memory. It is an authentic continuation of the great European lute-building tradition, only interrupted in the 18th century. It would be foolish to want to reconnect with this tradition, without taking into account the discoveries and experiments which particularly the Spanish guitar builders between 1830 and 1930 have contributed to plucked instrument construction. This most definitely does not mean that one turns the lute into a guitar.

Several of the principles of bar-bracing under the soundboard which have become essential in the making of Spanish guitars, for example the symmetrical arrangement of exclusively fan barring under the bridge, were already clearly developed in 18th century building of lute instruments. (Note the lutes of Sebastian Schelle and the mandoras of Ferdinand Wenger.)

It was most reasonable to accept those aspects of both lute and guitar construction which seemed to best serve the needs of the desired ideal of sound: warmth paired with clarity, brilliance with power.

The new lute weighs no more than an historical instrument; yet it is a wolf in sheep’s clothing. As in the 19th century rebuilding of violins by Stradivari and Guarneri, which turned them into forceful “classical” instruments without altering their bodily mass: the Liuto forte’s significant modifications are a new combination of various constructive details.

Should players of historical lutes protest that the Liuto forte no longer sounds like the instruments they are familiar with, this objection is to be gladly accepted. It was not only a question of amplifying the weak tone of the old lute. While preserving the fundamental qualities of the lute’s tone, the aim was to discover and introduce new sonic dimensions. The lute would not have made it through the 19th century, even if it had managed to sound simply a little louder, while still hanging onto its other characteristics.

The assertion, however, that the Liuto forte sounds like a guitar, does not stand up to the proofs of listening or careful investigation. Guitarists, at any rate, don’t think so. Some have recognised in it the heightening of the lute’s inherent possibilities. Others have even remarked that the difference between the old and the new lute is like that of the same voice speaking and singing.

Answers to the question whether the Liuto forte is a “genuine” and authentic lute or not, can with a good conscience be left to today’s and tomorrow’s audiences. I would rather ask if it were a “complete” lute: a lute that can not only fulfil the demands of the past but of the present, and can enthuse a wide range of listeners. In a beautiful book on Antonio de Torres, José L. Romanillos describes qualities of a guitar that “really sounds”, and these can go without hesitation for a lute that really sounds:

“I believe that a guitar which does not cover the greatest spectrum of possible sounds is not fully a guitar, and that a ponderously constructed guitar is not in a position to produce the refinements which go to make up the concert guitar.”1