Unless the customer expressly wishes otherwise, all models of the Liuto forte have fixed frets. There are good grounds for this.

On bowed instruments a continuous tone can be produced, but plucked instruments live from the resonance of the struck string. Anything that shortens this resonance means a reduction of the tone’s capacity to sing out – and its capacity to be shaped and musically exploited.

On historical lutes the resonance gets reduced mainly by three constructive features. First, the proximity under the soundboard of the first bar to the bridge; second, the fastening of the strings as an elastic loop; and third, the frets of gut or nylon tied to the neck. 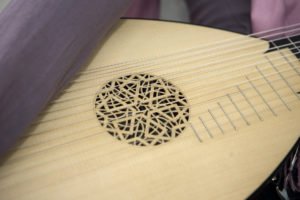 All three features contribute to the quick decay of notes on historical lutes, something which often leaves listeners who are not yet lute aficionados feeling somehow unsatisfied. The frets tied onto the neck, and the loops on the bridge as well, due to their elasticity act as dampers and work to withdraw vibration energy from the plucked string. The use of moveable frets on historical lutes tended to have a modestly practical and rather unglamorous reason, as an informed contemporary source explains:

”Concerning the frets, they may be fixed or moveable. The former may be made of wood, ivory or copper, as they are to be found on the cittern … Nevertheless, it is better for them to be tied on, so that one can shift them, now on one end and now on the other, a little higher or lower, and thus compensate for the shortcomings and inconsistencies which are always to be found in the strings, whose top half is different from its bottom half, and where one of the frets can be correctly positioned and another one poorly and falsely.”1

The commonly heard argument, that movability of the frets was retained for the purpose of finely adjusting unequal temperament, does not pay enough attention to the fact that the shifting of a fret always affects several neighbouring strings.

Practical investigation into transferring onto fretted instruments those unequal temperaments that were the norm for keyboard instruments has tended today to yield disappointing results.2 This is less surprising when we remember that a prerequisite for tuning in unequal steps was having a separately tunable string for every tone. Already in 1600, pieces were appearing in lute literature that modulate so freely through the keys, that one can easily imagine how equal temperament had its origin in the tuning of fretted instruments.3 The fact that controversies were constantly flaring up concerning the better temperament justifies the conclusion that there were always musical ears for whom Pythagorean thirds and wolf fifths were too high a price to pay for the occasional, especially effective pure interval.4

So long as the player does not intend to purposely make use of unsatisfactory string material, or insist on reconstructing a ”faithful“ historical lute, there is no reason whatever to cling to tied-on frets and their extreme acoustic disadvantages.

A vibrating string pushes the air ahead of it in the form of a bow wave. If the fret is too low, this air wave comes into contact with the fingerboard and with frets below, leading to premature collapse of the string vibration. This phenomenon accompanies frets of less than 0.8 mm diameter.

Another source of sound loss in perishable frets is connected with the film of water, a single molecule deep, which covers all objects. If the vibrating string, as a consequence of worn frets or too low an action, comes too close in its oscillation to the next fret, then the water film covering fret and string comes into contact, and this diminishes the energy of the resonant vibration.

Both effects can be tested on electric guitars enabling the lowering of the string action while playing. Just before the strings begin to sizzle, they can be clearly heard to go nasal and lose sustain. It is important, therefore, to avoid both frets which are too low and too low a string action.

Tied-on frets are often enough reduced beyond the critical 0.8 mm point by regular playing – not to mention their uncomfortable tendency to slip and undermine any reasonable fretting system. Double frets are particularly unfavourable. Here only the first of the pair carries the string vibration, while the other will only dampen the string with its molecular film of water.

4 In equal temperament, thirds are higher than pure and fifths lower than pure, but well within bounds of the bearable. When wolf intervals occur, the degree of out-of-tuneness is no longer audible as a consonance. These intervals were put up with as unavoidable in order to achieve particular purity in certain keys.