The stringing of historical lutes

The main criterion for testing good stringing is the balance between descant and bass. A two part texture, where the top voice moves in the octave above middle C and the bass moves among the ledger lines below the bass clef, should still not give the feeling that there is a gaping space between the voices. The bass strings must be adjusted to the brightness of the descant strings, in order to reach a desirable degree of blend between top and bottom parts. This harmonious adjustment can actually be the decisive factor in the impression an instrument makes on the listener. 1 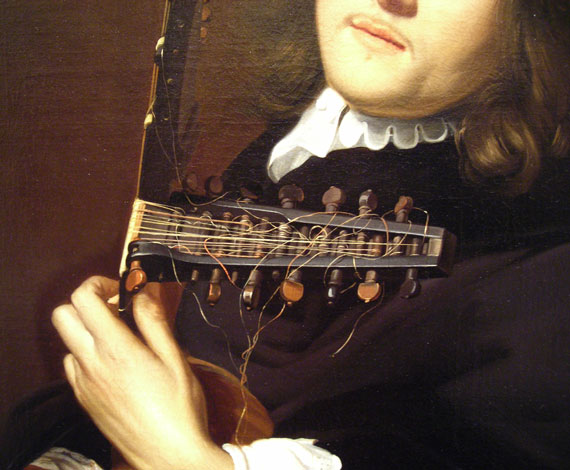 The stringing on copies of historical lutes, which will influence not only the sound but precisely the playing technique as well, is a particularly delicate and dodgy chapter in the history of performance on “period instruments”. Neither the bass nor the descant stringing of early lutes have very much in common with the kinds of strings habitually in use today; and it is a little naive to assume that simply the adoption of modern gut strings will bring us nearer to the original sound of an historical lute.

A gut treble string of the lute, today, will consist of 10 to 12 strands which have been cut from the intestines of a mature sheep. This will have been mechanically twisted and subsequently polished by precision machinery. Such a string is expensive, sounds rather thin and sharp, and with intensive practising is frayed and useless after a day or two. Its sole advantage over an older style gut string would lie in the “fifth purity”, guaranteed by the supplementary even smoothing.2

The best among the old lute chanterelles were known as “Roman Quints”, and comprised two unsplit and unsmoothed guts of suckling lambs. They sounded fantastic, stank abominably and withstood the player’s assaults, if they didn’t tear under tension, for at least three or four weeks. Their sound had something more in common with a nylon string and the tone was richer in fundamentals than the gut strings made in today‘s fashion. Due to their higher longitudinal elasticity, lamb gut chanterelles would oscillate more roundly and fully. Thus they could be plucked close up to the bridge.

For the bass strings on old lutes, plain gut or metal was used until 1700. Only later were they wound with copper or silver wire, in which case both silk and metal wire were used for the inner core. The wound wire over gut or metal was not tightly coiled as in modern wound strings, but the coils remained relatively open and far apart. The string was left thereby less stiff and resistant to bending than today’s tightly wound strings – and could also be satisfactorily plucked up close to the bridge.

The bass strings used in the period of John Dowland (1562-1626) were a plain unwound gut of a considerable diameter. They sounded rather more muffled and dull than later strings, both open- and tightly-wound, and desperately required the support of paired octave strings. To elicit delight from this kind of string would probably be one of the greatest challenges facing today’s lute recital audiences.

In general it can be said that historical lute strings had more fundamental tone in the descant – that is less thin and toppy than today’s. With the open wound strings, on the other hand, they were richer in overtones, that is brighter, in the bass.

This discovery may be of interest to guitarists: how the dark character of the early Spanish guitars sounded somewhat different at the time, due to the kind of string material in use. The brighter gut strings contrasted more strongly with the basses, while the silken core of the bass strings gave a briefer and duller tone than the nylon core in their modern counterparts.3

1 On some recordings of Baroque music on modern guitars which have been fitted with additional bass strings, the blend between the voices is so slight – owing to the dull tone of the deep strings with their poverty of overtones – that one certainly does wish for the return of the octaves in the ancient lute’s bass register.

2 The final polishing of gut strings by machine was first introduced in England around 1900. Critics noticed at that time that not only durability but also the sound of the string would suffer from it. The previous situation had not, though, been exactly lacking in discomfort. The players bought string material of a certain thickness by the bundle, or hank, in which they sought out the lengths required, and which appeared to promise a certain fifth purity. The old lament over the falseness of gut strings can be heard right through the 19th century.

3 This can be convincingly demonstrated by listening to the vintage recordings of Miguel Llobet (1878-1938).