It was already argued in the 19th century that the lute was more difficult to hold than the guitar. This is a piece of prejudice not borne out by experience.

With only the support of the usual footstool, the guitar might well sit firmly on the left thigh due to its indented sides; yet the playing position in relation to the centre of the player’s body is more strained and unbalanced than the position of the lute. When held in the same manner, the lute has its first fret in approximately the same position in relation to the player as the guitar’s third fret. This more relaxed holding position of the lute is nevertheless not to be mastered without practice and requires assistance, no less than do bowed instruments, and time to get accustomed. 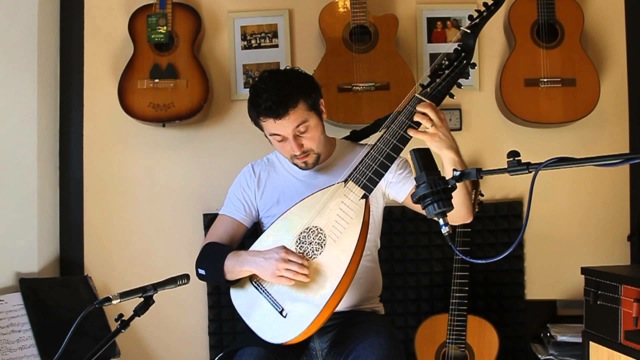 Even the old masters of the lute made use of a range of devices to hold the instrument firmly. These included resting the lute on the edge of a table (an expedient also recommended for the guitar by Fernando Sor), and the use of a strap over the shoulder or even a thread along the back of the lute, which could be attached by a loop to a button on the player’s clothing.

More modern supports, similar to those used by guitarists, are also available for the Liuto forte: www.tappert.de

The use of straps for supporting a lute is explained in detail in the following two videos. The instruments used for the demonstration are not Liuti forti, but replicas of historical lutes: