The limited range of the guitar’s bass strings forces guitarists to make concessions in correct voice leading and spurs them on to record achievements in leaping and stretching and stopping in all positions.1 Since all the bass notes apart from E, A and d have to be stopped, it is not possible to keep up real contrary motion in counterpoint for long stretches unbroken. This is not solved by acrobatic dashing up and down the fingerboard. The musical listener is often therefore left more satisfied by a guitar duo. 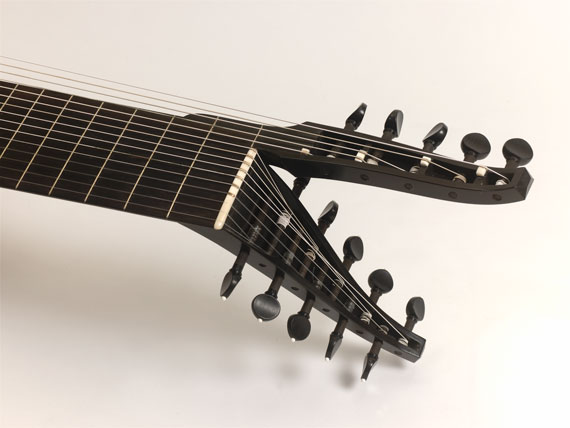 A guitar tuned to an E minor chord with additional deep D and/or B natural in the bass would be doubtlessly better equipped. Most of the guitars, however, which have been fitted for this purpose with 8 or more strings, are not only visually inelegant, but often have so much ambient resonance as to distract the player’s attention with constant dampening of unwanted sympathetic ringing. This phenomenon is apparent on lute instruments as well, but is never as disturbing as it is on a guitar, with sympathetic vibration of up to 10 strings without any soundpost to co-ordinate the top and back, can lead to harmonic chaos.

Over and above such aesthetic reservations, it is the soundboard construction which limits the profitable extension of the guitar’s range into the depths. The dark character prevents all tones deeper than D from blending at all with the descant – and if one wanted to brighten them up, the driving area (sound ellipse) would have to be diminished, taking the high strings back to the sound of the “classical” period guitar.

1 The greatest obstacle for guitarists playing baroque lute repertoire on the Spanish guitar is not the lack of strings below E, but the missing low G and F strings. The Austrian musicologist Kiesewetter in 1831 suggested a tuning adding G & F strings between the A & E, and extended down to contra A.